My public history and digital humanities practice began modestly more than twenty years ago when I took a part-time job as a tour guide at a historic house museum in Richmond, Virginia, while I worked on my master’s degree at the University of Richmond. My year at Agecroft Hall, a reconstructed Tudor manor, coincided with a major interpretive shift in the museum from emphasizing material culture to a broader focus on the social history of Tudor and Stuart England. During my Ph.D. work at Tulane University, I became involved as a research assistant for an NEH-funded planning group that ultimately established one of several regional humanities centers at Tulane.

I was hired by Cleveland State University in 2003 on a 20th-century U.S./public history line, and my initial responsibilities in the latter included teaching Introduction to Public History and relaunching the history department’s internship program. Two years later, my colleague Mark Tebeau and I collaborated on a transit-oriented public history project that placed 19 touchscreen kiosks programmed with Flash interfaces that interpreted the history of Euclid Avenue through text, images, audio, and video. This project led to the development of a major oral history project now popularly known as Cleveland Voices. Formally titled the Cleveland Regional Oral History Collection, Voices is a dynamic project that continues to work with faculty, students, and regional partners to conduct and share oral histories. To date, the collection has amassed nearly 1,200 streamable interviews in more than two-dozen series. Three CSU Office of Research Undergraduate Summer Research Awards have supported the development of History Speaks, a website envisioned by my colleague Shelley Rose that uses oral histories from the collection to teach historical thinking.

With Tebeau, I was active for several years in a series of U.S. Department of Education grant-funded Teaching American History workshop programs, notably The Sounds of American History. This work led us in 2008 to co-found the Center for Public History + Digital Humanities (CPHDH), for which I have served as director since 2013. We also created Cleveland Historical, a mobile app project designed to expand the curation of places across the Cleveland metropolitan area. Like Voices, the app has been a tool for teaching and public engagement, having augmented dozens of community partnerships from Detroit Shoreway to Shaker Heights. Cleveland Historical has grown to more than 750 location-based stories.

The project also became the pilot for Curatescape, a mobile publishing framework that generalized the app’s codebase for wider use. Developed in the Center with support from NEH, the Ohio Board of Regents, and CSU, Curatescape now supports more than four-dozen digital projects worldwide, ranging from small historical societies to major universities.

With another colleague, Meshack Owino, I directed the Curating East Africa project, a partnership between CSU and Maseno University in Kenya that began with an NEH Digital Humanities Start-Up Grant titled Curating Kisumu in 2014-15 and continued with additional investment by CSU in 2015-16 and an NEH Digital Humanities Advancement Grant in 2017-18. A central component of Curating East Africa was to build Curatescape for WordPress, a single plugin and theme that promises to revolutionize digital storytelling in the developing world by lowering barriers that divide ambition from adoption of digital humanities practice, beginning in East Africa. In addition, MaCleKi, the pilot for the Curatescape for WordPress platform, features 54 location-based stories about Kisumu that were collaboratively written by students from Maseno University and Cleveland State University. (For more on the results of the project’s, see our NEH white papers for Curating Kisumu and Curating East Africa.) 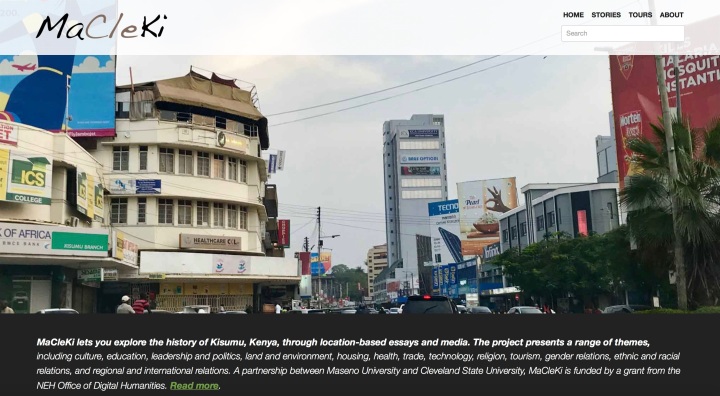 Most recently, Erin Bell and I have been working on a new NEH Digital Humanities Advancement Grant project titled “PlacePress: A WordPress Plugin for Publishing Location-based Stories and Tours.” The PlacePress plugin offers a free, intuitive, flexible, and sustainable means for humanities and social science scholars, students, organizations, and communities to create and share map-based tours on any WordPress-based website. The grant phase of the project in 2020-22 involves three use cases, including our own Cleveland Walks audio tour site, Hines Park Heritage Trail (a Detroit-based project of Wayne County Parks in collaboration with the Wayne State University Public History Program and the Michigan Department of Natural Resources), and American Citizen: Then and Now (a thematic tour of New Castle, PA’s Historic Hill District curated by the Lawrence County Historical Society in collaboration with the Slippery Rock University Stone Center for Public Humanities). The University of Oregon Libraries is coordinating remote user testing of the plugin, which will be released to the WordPress Plugin Directory with full documentation at the conclusion of the grant.

In addition to my work as the director of CPHDH, I have served as a grant reviewer for three NEH grant programs and have provided consulting for numerous public history projects and museum exhibitions, including for Stokes: Honoring the Past, Inspiring the Future. I also have have been active in the area of historic preservation. I have written two successful National Register of Historic Places for neighborhood historic districts in Cleveland Heights, and I have served since 2010 on the Cleveland Heights Landmark Commission.