In March 2018, I visited my parents in my hometown of Gainesville, Georgia, after a spring break research trip to Augusta. We took our then 10-year-old daughter to Ivey Terrace Park and Wilshire Trails, two parks that trace the course of Rock Creek to where it empties into Woods Mill Bay, a finger of Lake Lanier fed by Black Branch, another creek that runs behind the house where I grew up on its way to the Chattahoochee River, now the main channel of the lake. In Wilshire Trails, I picked up this mica-filled rock in the creek bed next to the playground and took it home because it reminded me of the mica I enjoyed playing with as a kid. 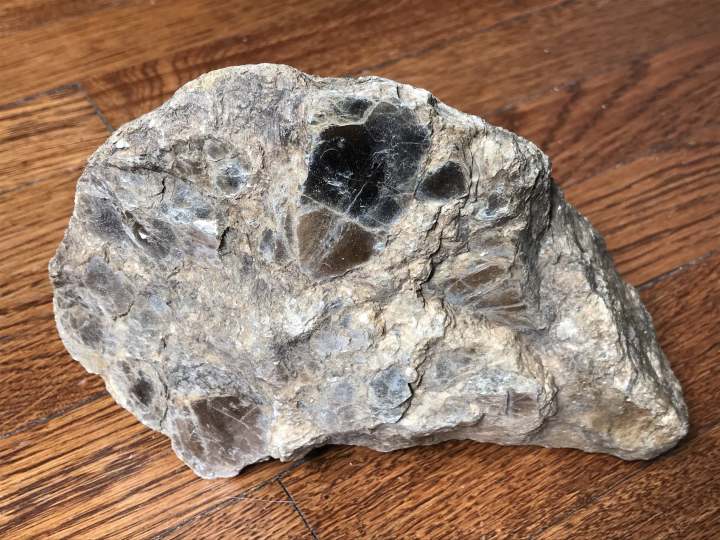 Ivey Terrace and Wilshire Trails were favorite places for me when I was growing up. I remember attending birthday parties in Ivey Terrace, including one during which we were playing in the creek when one kid sank to above his knees in what we told each other must be quicksand. I also remember the little stone springhouse, benches, and steps that I learned much later were artifacts of park improvements in 1936 by the Civilian Conservation Corps, whose workers used stone quarried along the stream. I also spent many summer days with friends, pedaling BMX bikes down curving paths and through covered bridges that crossed the kudzu-lined creek in Wilshire Trails. Yet this chunk of mica took me back to something I hadn’t thought about in many years—the fun of spying the silvery glint of mica in the creek bed and of carefully peeling off nearly transparent sheets.

My new souvenir conjured a different memory for my father, who grew up in the 1950s about a thousand feet from where the creek flows through Wilshire Trails. He told me that he remembered discovering the mouth of a mine shaft in the woods a few hundred feet up the hill from the creek where he said mica had been mined into the 1940s. Now I was really curious. Gainesville and especially Dahlonega to the north once had lucrative gold veins that prompted the U.S.’s first gold rush in the late 1820s. I grew up with stories about my 4x-great-grandfather Benjamin Parks, long the most commonly credited “discoverer” of gold (which of course the Cherokee had discovered long before). Gold stories made me—surely like countless other Northeast Georgia kids—dig expectantly in creek beds in hopes of finding a little gold of my own. But mica mines? This was a piece of my hometown’s past that I’d never learned, and it turns out that the gold rush stimulated interest in mining many other minerals, as historian Drew Swanson mentions in his recent book Beyond the Mountains.

With a little research I learned that indeed mica mines once existed on the wooded hillsides on the northwest side of town. The largest, called the Merck Mine or Old Hope Mine, began operation in 1890 near present-day Holly Drive (formerly Grape Street, named for vineyards kept by the Gower Springs health resort near present-day Green Street Circle). The mine continued to operate under various owners, including Edwin S. Wessels (possibly the namesake for nearby Wessell Road) and Sidney O. Smith. Local interests sold the mine to J. A. Rhine of Atlanta, who ran it in 1943-45. Many southern mines supplied the wartime demand for mica, which was used to make clear covers for airplane instrument panels and as a flame-retardant insulator in electrical equipment. Other mines operated in the vicinity, including the Rogers and Anderson Prospect, located near Chestatee Road and Dixon Drive.

I still don’t know enough about mica mining to do more than wonder whether the mine shaft my father found was related to these other operations. I don’t know whether this rock I found was unearthed as a result of mining or if perhaps it came from the same quarry whose stone built features in Ivey Terrace. Regardless, it’s fun to pick up this shiny stone that now calls to mind more than childhood explorations of Rock Creek.